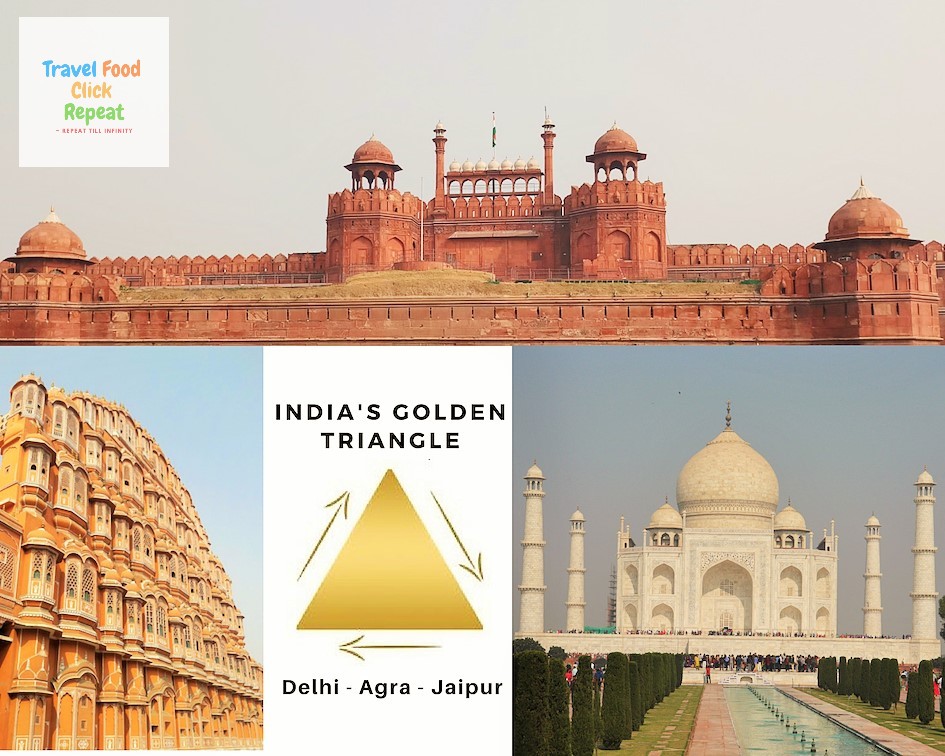 What is India’s Golden Triangle?

India’s Golden Triangle is a tourist itinerary which connects the national capital Delhi, Agra and pink city, Jaipur. A visit to these three palaces is known as the Golden Triangle because these locations together form a triangle on the map.

Generally, tourist prefers to start there Golden Triangle circuit with the exploration of the national capital. They usually visit the Mughal Era structures or ancient places with national and architectural significance. It includes but not limited to Red Fort, Jama Masjid, Humayun Tomb, Chandni Chowk, India Gate, Connaught Palace, and many others.

Then they travel to Agra to visit the beautiful Taj Mahal, Agra Fort, Fatehpur Sikri, and others.

Last but not the least they visit the capital of Rajasthan, Jaipur. Here, they visit the ancient forts, palaces, markets, and others. They usually go to Amer Fort, Nahargarh Fort, Hawa Mahal, Jal Mahal, Jantar Mantar, Birla Temple, Albert Hall Museum, World Trade Park and many others.

However, nowadays, the tourists do not limit themselves with just a visit to the Golden Triangle. In order to add flash to it, they add one or more destination to it which depends from tourist to tourist. Like some prefer a tour to Golden Triangle with Goa, some prefer it with Kerala or some with Ladakh.

Why It is famous?

It is quite popular amongst the tourists because of the following reasons:

Connectivity – The Golden Triangle is a great tourist circuit mainly because of its connectivity. The circuit is by road about 720 km long in which all the destinations are just about 240 km away from each other. Since the Golden Triangle is connected with a 6-lane highway hence it does not have any off the beaten route.

The circuit is also well connected with super-fast trains and by the aerial route which makes it sweeter. Even if you are a solo traveler this route is great for you. No matter when you are visiting these destinations, you will always be surrounded by a lot of tourists which makes it safer for you.

Unique Destinations – All the three destinations have a unique culture, different architectural design, even also have separate food cuisines. Since Delhi, Agra, and Jaipur were ruled by different rulers from time to time. Hence, you can enjoy three different dynasties in a single trip. And, the best part is due to such diversity, you will not get bored.

If you visit a place at the right time on the calendar, then you can make your stay more memorable. So, you might be thinking what is the best time to visit the Golden Triangle.

Generally, tourists choose to visit the Golden Triangle in India in the winter season. Usually, the winter season starts in mid-October and till the first week of March. Delhi, Agra, and Jaipur can be freezing cold due to Himalayan cold wind influence especially during mid-December till the end of February.

But, trust me on this, it is far better than the summer season when the temperature is about 50°C that can scorch you. During the winter season, you can also enjoy many festivals like Diwali, Christmas, Holi and so on.

Read some of our post regarding the palaces of the Golden Triangle: